Ahead of legislative changes in Scotland, DS Smith worked with Tesco to find an effective solution to manage food waste from its Metro and Express stores. Following the success of the Scottish project, DS Smith and Tesco worked together to deliver the National Food Backhaul project across the rest of the UK. 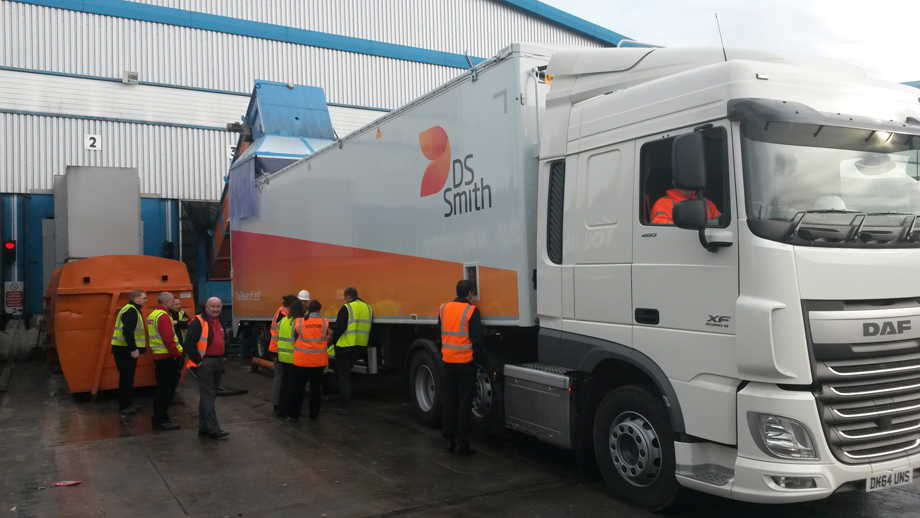 Ahead of legislative changes in Scotland, DS Smith worked with Tesco to find an effective solution to manage food waste from its Metro and Express stores.

The Waste (Scotland) Regulations 2014 state that “food businesses which produce over 5kg of food waste per week must present food waste separately for collection”. The legislation came into effect on 1 January 2016, so prior to the change, DS Smith, Tesco and Whitham Mills worked together to ensure that the transition would be as smooth as possible.

DS Smith had already managed food waste from larger stores across the Tesco estate for a number of years. The new legislation required smaller stores to collect food waste separately as well, so to ensure Tesco’s legislative compliance, we needed to find a solution for the smaller stores.

Following the success of the award-winning Scottish project, DS Smith and Tesco worked together to deliver the National Food Backhaul project across the rest of the UK.

While the collection programme developed in Scotland was generated in response to legislative requirements, the project was expanded to England and Wales because of its economic and environmental benefits.

There is a high number of Tesco Metro and Express stores with a wide geographical distribution across the UK. Placing new food waste bins at each store would have been costly, so we looked to Tesco’s backhauling model to provide a solution to the challenge. Backhauling is an efficient method of removing waste streams, because waste is taken away in the same trucks that bring products to stores.

The return leg of the delivery system was already used to backhaul card, plastic and bakery waste for recycling, so we had to expand the logistics to allow for the transportation of food waste.

A key challenge lay with the limited space inside the delivery vehicles. At larger Tesco stores, the whole of the delivery vehicle is emptied of product at each store, leaving space for the backhauling of various waste and recycling streams. This is not possible with smaller Metro and Express stores, as the vehicles have ‘round-robin’ routes with a number of stops at different stores, dropping off products and picking up waste streams at each stop.

This means that the trucks are never fully empty, and that material for recycling is carried alongside product deliveries for the stores elsewhere on the route. The highest priority was to ensure that the food waste for recycling was managed in such a way as to eliminate any contamination of new products.

By improving the existing backhauling model, we ensured that food waste is taken away efficiently without contaminating any other recyclable streams.

Food waste is transported in cages. To eliminate the possibility of any leakage or contamination, we introduced brown bags to stores, specifically for the collection of food waste. When full, brown bags are placed into thick plastic liners within cages, which are backhauled from the stores.

The food waste itself is consolidated at Tesco RSUs prior to delivery to anaerobic digestion plants. We sourced bespoke leak-proof trailers to allow the material to be transported in line with legislative requirements.

Adopting the new system improved the efficiency of the transport logistics, as vehicles never travel half-empty – space is utilised within them at all times.

In Scotland, the project resulted in around 450 tonnes of food waste per annum being moved higher up the waste hierarchy, and has reduced the number of bin uplifts by 3,500 every year. The improvement of route logistics has reduced vehicle journeys by approximately 3,000 miles annually, saving circa 700 tonnes of CO2 per year.

DS Smith and Tesco followed up on the Scottish project’s success by rolling out the same system across the entire network of Express and Metro stores in England and Wales. Some key successes of the national project are:

The Scottish project won Retail Recycling Champion at the 2016 LetsRecycle.com Awards for Excellence in Recycling, which recognised ‘a successful project which has delivered greater recycling and improved sustainability in waste management within the retail sector’.

It was also shortlisted for Best Retail Recycler at the National Recycling Awards 2016, and Best Food Waste Collection System at the AD & Biogas Awards 2016.

The national rollout of the project was shortlisted for Best Retail Recycler at the National Recycling Awards 2017, and for Best Food Waste Collection System at the AD & Biogas Awards 2017.

“It is great that Tesco has been recognised for this project, it saw collaborative working between internal stakeholders and DS Smith to agree and deliver a new procedure within a limited timescale. This project has further raised awareness of food waste amongst colleagues and supports our overall approach to manage food waste in accordance with the food waste hierarchy”

Find out how we worked with Tesco to fulfill its zero waste to landfill commitment in the UK.